Apparently, writer for online newspaper Roll Call Warren Rojas wasn’t interested in heralding Janet Yellen’s glass-ceiling shattering nomination as the first female chair in the 100-year history of the Fed. Because celebrating women for their accomplishments in institutions that continue to be heavily male-dominated would be too obvious? Or perhaps writing about women’s clothes is a lazy, cheap shot to gain readers?

Instead, Rojas decided the salient factor in this ground-breaking nomination was the fact that Yellen wore the same outfit in two recent public appearances. He writes, “at least we know her mind won’t be preoccupied with haute couture” and concludes with the enlightened statement, “mind you, nobody has ever accused Heard on the Hill of being particularly stylish. But we do manage to switch up outfits on the reg.” 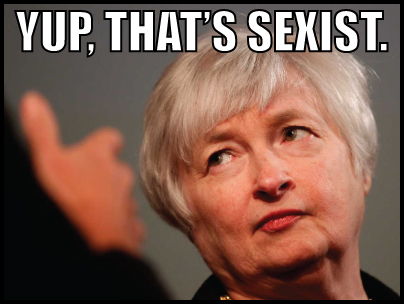 Although Rojas’s follow-up article acknowledges that some of the criticism he received is valid, his overall tone is dismissive of the fact that the sexist practice of commenting on women in politics' clothes - rather than their opinions and accomplishments - undermines women’s likeability and credibility. Maybe if Rojas had done his homework, he would realize that focusing on women’s appearance is far from trivial and perpetuates the underrepresentation of women in public leadership.

Since Rojas seems to be slightly lacking in creative material when writing about Janet Yellen, I’ll help him out. Maybe next time he can write about her trailblazing and impressive tenure as Vice Chair of the Federal Reserve, and before that President and CEO of the Federal Reserve Bank of San Francisco and Chair of the Council of Economic Advisors under President Clinton. And if all that doesn’t interest Mr. Rojas, perhaps his readers would like to know that when Janet Yellen is not busy becoming “the most important person in the world,” she is the owner of an impressive stamp collection, valued between $15,000 and $50,000. Boom.