Weekly Brief: January 29, 2014
Brought to you by Women's Campaign Fund

SO TRUE, SOTU
I was diggin' yesterday's State of the Union and the POTUS' firm conviction that "when women succeed, America succeeds." CAN I GET AN AMEN? How 'bout a retweet? 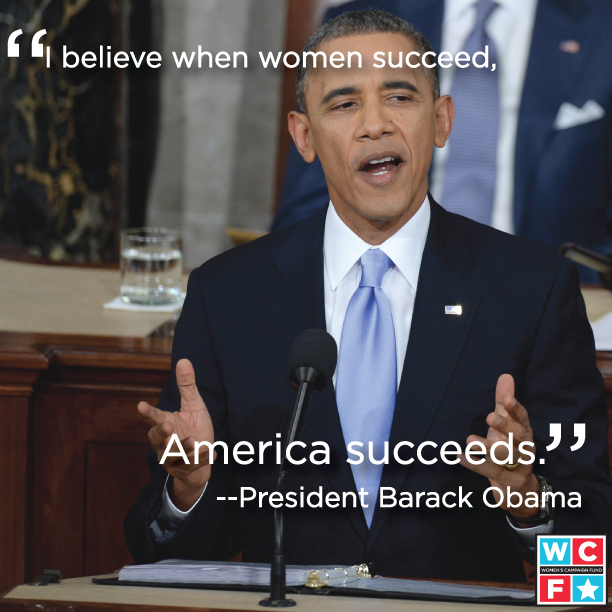 A Win For Wendy
Republican and former Fort Worth city councilwoman Becky Haskins recently went to bat for her former colleague Wendy Davis, denouncing attacks from the GOP that question Davis' commitment to her children. Friends don’t let friends get smeared.

Cartoon Villain Drops Out of VA Race
The guy who called rape in the military "as predictable as human nature" dropped out of the race, making room for a female candidate to possibly grab the nomination! And probably more time for mustache-twirling.

Can I Just Move to Themyscira Now?
Check out this awesome documentary about everyone’s favorite feminist demigoddess, Wonder Woman, and learn a bit about her history as well as the importance of the super-heroine in our society. It’s way better than yet ANOTHER installment in the Dark And Gritty Superhero Movie series…

Framed!
Anti-choice candidates are now reframing reproductive rights as a tax issue in order to distract from how, y’know, it’s actually about WOMEN’S LIVES AND HEALTH.

Heroes in Hijabs
In order to combat prejudice in Canada, three women have created Support Another, a campaign designed to teach people how to be decent AND non-Islamophobic!

The IT Gal
When Lyndsey Scott isn’t stomping the runway for Victoria’s Secret and taking up Hedy Lamarr’s mantle, she codes her own apps for the iPhone, helping young Ugandans develop entrepreneurship skills. Maybe she can finally decode what Victoria’s secret really is?

I Don’t Heart Huckabee
So, according to Mike Huckabee, women who demand birth control “cannot control their libidos.” Ugh, that whole women + birth control = sluts equation is so 2012.

Ready! Aim! Tweet!
This article proposes that social media backlash against the Todd Akins of the universe may be what it takes to get finally get a woman in the White House. So keep on callin' out awfulness! As long as it's under 140 characters.

... Speaking of Backlash
Todd Kincannon apparently felt that it was okay to say some really horrible things about Wendy Davis. What’s wrong, Todd? Did you get tired of verbally abusing veterans?

The ‘Wurst is Yet to Come
Out of 33 GOP campaigns surveyed here, only 2 are being run by women, and only 5 candidates are female. Break out the grill--it’s another Congressional sausage fest!

Just in Time for the Super Bowl!
The #NotBuyingIt app now provides an easy way to scream about problematic ads on social media and find other people to scream about them with.

California Girls are Undeniable
California's State Assembly recently appointed its first openly lesbian speaker, Toni Atkins! I wish they all could be California girls like Toni.

A Step Up from High Heels
Another weird cover illustration of Hillary Clinton popped up, this time from NYT Magazine. Can we knock it off with the questionable Photoshop now, please?