Try Not To Cringe

Weekly Brief: July 9, 2014
Brought to you by Women's Campaign Fund

Two Can Play That Game
This week's featured Game Changers are Congressional candidate Gloria Bromell Tinubu (SC-07) and State Assembly candidate Sandra Mendoza (CA-53)! Both ladies are more than qualified for the job and are sure to win you over... 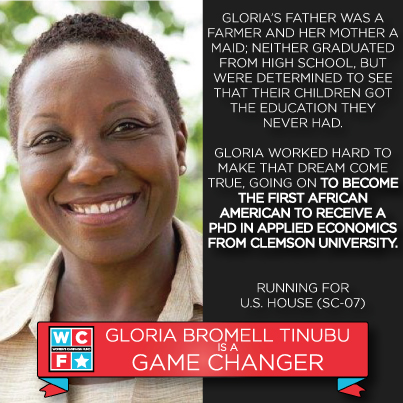 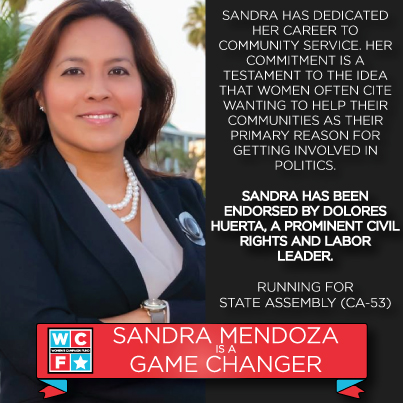 Mags and Riches
It’s always a welcome surprise to see a featured article about women politicians in popular magazines…until you actually read it. They almost always discuss beauty secrets, exercise routines, and parenting. As much as people want to learn about U.N. Ambassador Susan Rice, they'd rather hear about her experiences than that her “trademark [is] aqua-blue” eye-liner. Wanna go for shock value? Publish stories about their achievements and experiences.

Four Stars and 236 Years Ago
Naval Admiral Michelle Howard is changing the military for the awesome. She is the first woman to receive a fourth star in the Navy’s 236 year history! Oh wait and she’s also the second in command of the entire Navy and was the first African-American woman to command a naval ship? She's making waves in the traditionally patriarchal navy...eh? Get it?

AZ Feminist AZ They Come
Did you know that Arizona is third in the nation for having the most women in elected office? If you’re in Arizona for the upcoming elections, you'll want to check out Congressional candidate Mary Rose Wilcox and Congresswoman Kyrsten Sinema. Both are WCF endorsed Game Changers and ready to tackle any obstacle that the Wild West throws their way.

Try Not to Cringe, I Dare You
Monday morning Fox News had a segment “Husband Appreciation: Sage Advice for Wives” with author Susan Patton. She informed viewers that women must marry young and treat their husbands with respect or else they will be forced to enter the dating world in their 30’s! THE HORROR.

Worldview Wonder
Interacting with people of different cultures can be difficult, just ask your rude uncle, but one study shows that it can teach us how to think more critically. Without diverse experiences, we would have a narrower way of thinking. Diversity is the key to the future—I wonder if male-dominated Congress knows that.

World Cup Woes
Watching the World Cup? Of course you are. So you’ve probably heard that Landon Donovan is the "leading goal scorer in U.S. Soccer"—FALSE. His 57 goals are nothing compared to the top five highest American scorers (who happen to be women). Abby Wambach is #1 with a world record of 167 goals scored! Hey Donovan, maybe start playing like a girl?

We Love Lucy
Lucy Flores, a candidate running for Nevada Lt. Governor is bringing a perspective that the American people definitely aren't used to seeing. During a debate, she openly admitted to having an abortion when she was 16 years old, boldly stating, "I don’t regret it because I am here making a difference for many other young ladies."

Choose Your Own Adventure
Nour Saleh took on a Tumblr challenge of drawing herself as different superheroes, while awesomely and cleverly incorporating her hijab in the designs. Check ‘em out! Her creations show her as Spiderman, Thor, Katniss Everdeen, Captain America, and many more. Now if only we could use Captain America’s shield to keep us from the new non-feminist Wonder Woman comic, things would be peachy.