Weekly Brief: July 23, 2014
Brought to you by Women's Campaign Fund

Changing The Tune
Y’all ready for this? Brenda Lawrence (MI-14) and Pramila Jayapal (WA State Senate) are this week’s featured Game Changers! I suggest you check them out since their primaries are coming up on August 5th! That’s 13 days. Less than two weeks. REALLY SOON. 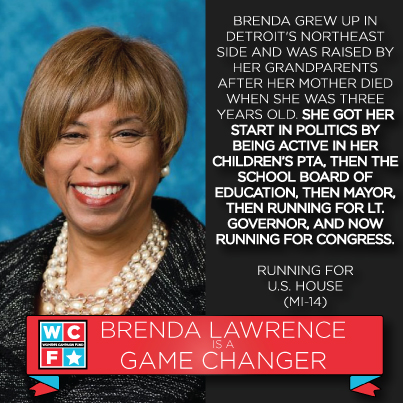 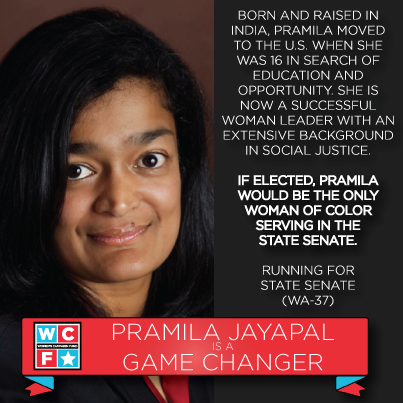 That's Rich, Mitch
You guys, Senator Mitch “Captain Oblivious” McConnell, really understands women. He says sexism in the workplace is a thing of the past “unless he’s missing something.” Nah Mitch, you’re not missing a thing…except for obvious pay inequality and lack of women in board positions. Ugh. Y'know who's actually not missing anything?

Get On My Level
Male politicians are all about pie charts and graphs. According to Congresswoman Renee Ellmers, this is stuff that we women don’t understand, and they have to “bring it down to a woman’s level.” I’m so glad she’s there to translate man-speak into lady-language. PHEW.

Comic Relief
Marvel announced that a woman is now wielding Mjolnir, Thor’s infamous hammer. Not temporarily or for one issue; she’s the real deal. They also announced that Falcon, the African-American partner of Captain America will take over after the Captain’s death. Oh, and a SIXTH reprinting of the Pakistani-American teen superhero, Kamala Kahn. The Marvel Universe is changing with the times in an attempt to appeal to a broader, more diverse audience. By the hammer of Thor, THANK YOU!

Hide And Seek
Former U.S. Senator (and now U.S. Senate candidate in a different state?) Scott Brown knows how to play it when it comes to discussing birth control—avoid it at all costs! You guys, everyone handles confrontation differently. Some people attack conflicts head-on and some people…just hide in the bathroom.

Voted Most Likely To Vote: Women
Women are more likely to vote and it’s not just due to “Beyoncé voters.” It’s because women tend to have more run-ins with government programs than men: SNAP, children’s education, healthcare systems, and elderly care. So, you want conscientious voters? Look in the mirror.

We Got Chu
Politicians of both genders working together is music to my ears. Congresswoman Judy Chu (CA-27) sponsored the Women’s Health Protection Act of 2013 that would no longer allow states to impose certain stipulations for abortion centers that keep women from receiving medical care. This bill started in the Senate via Senator Blumenthal (CT) and started to gain momentum once Chu got a hold of it in the House. Her bill has 124 co-sponsors and counting! Sharing is caring.

Wink Wink, Nudge Nudge
It’s kind of the news we’ve been waiting for! Hillary Clinton appeared on The Daily Show last week and she may have hinted at a run for the presidency! Jon Stewart “tactfully” tried to get her to spill the beans by asking her what shape her ideal office would be. She cleverly replied, “the fewer corners that you can have, the better.” So get excited...maybe…

V-Party
Humor and reproductive justice are MsRepresentation’s two favorite things, and that's why I'm so pumped about Lady Parts Justice—a new movement that uses NSFW humor to shed light on American women who want to take control of their bodies. Their “From V to Shining V” campaign is a work of brilliance. Did I mention that it was co-founded by Lizz Winstead, former head-writer for The Daily Show? And that Sarah Silverman is also aboard this sass-train? Yes, siree.

White House, Shmite House?
The Daily Beast says “women should forget the White House.” Pardon? Okay, the author of the article, Keli Goff, really means that women should maybe focus more on judicial seats than the Oval Office. Especially with the recent rulings, she makes great points. What do you think? Ditch the Oval Office in exchange for a killer Ruth Bader Ginsberg robe or bee-line for Commander in She-ief? Or why not both?