SCOTUS With The Mostest

Weekly Brief: August 6, 2014
Brought to you by Women's Campaign Fund

It Takes Two
Male politicians are a dime a dozen—so WCF is endorsing two new candidates! Donna McAleer (UT-01) and Jo Anne Simon (NY State Assembly-52) have just been added to our growing list of endorsed candidates. Check 'em out!

Frontier Pioneer
This news might make your week: WCF Game Changer Donna Christensen won her primary, meaning she could end up being the first Black woman governor in the United States AND its territories. Pretty cool, right?

The Gloves Are Off
WCF Game Changer Alison Lundergan Grimes is shifting into high gear to beat Senator Mitch McConnell in the race for the Kentucky seat. Her camp released a new ad that sheds light on Senator Mitch McConnell’s war on women, revealing that he’s voted against the Violence Against Women Act AND the Paycheck Fairness Act. Those are two more reasons why Senator McConnell shouldn’t win and two MEGA reasons why we need Alison Lundergan Grimes.

Your Feature Presentation
And now onto this week's featured Game Changers! This week we have Hawaii's own Colleen Hanabusa and Hina Wong-Kalu. 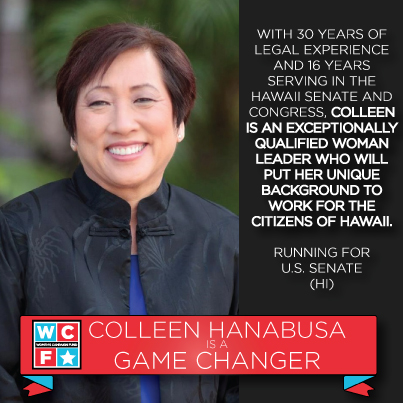 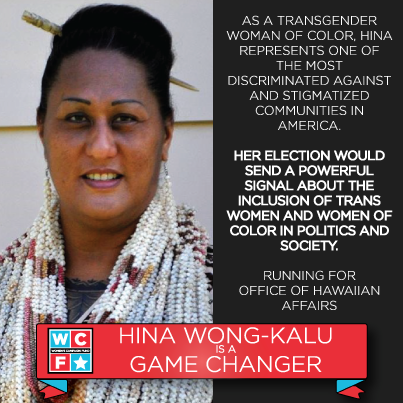 SCOTUS With the Mostest
Justice and rebel extraordinaire Ruth Bader Ginsberg sat down with Katie Couric to discuss the stain of recent Supreme Court decisions, saying “Contraceptive protection is something that every woman must have access to to control her own destiny.” Couldn't have said it better ourselves—but I guess that's why they call her Notorious RBG.

CBS Knows Drama
CBS just added Meghan Lyvers and Brianna Bennett to executive positions in drama development because of their impressive history in the industry. Two Women TV executives? Sounds like a pilot to me.

Crazed and Confused
“Women against feminism” (AKA a severely misinformed group of women) made quite the commotion on the interwebs last week with their anti-feminist grievances, blaming feminism for victimizing women. Hmm, last I checked, it’s sexism and violence against women that are creating victims. When is “Women against sexism” going to take off? Oh, I guess it has…because it’s called feminism.

Mass Progress
Massachusetts women could have been in bad shape after the Supreme Court ruling against buffer zones. However, there’s good news! With help from activists and Governor Deval Patrick, a new bill has been passed to allow police authority at abortion clinics. We do get by with a little help from our friends.