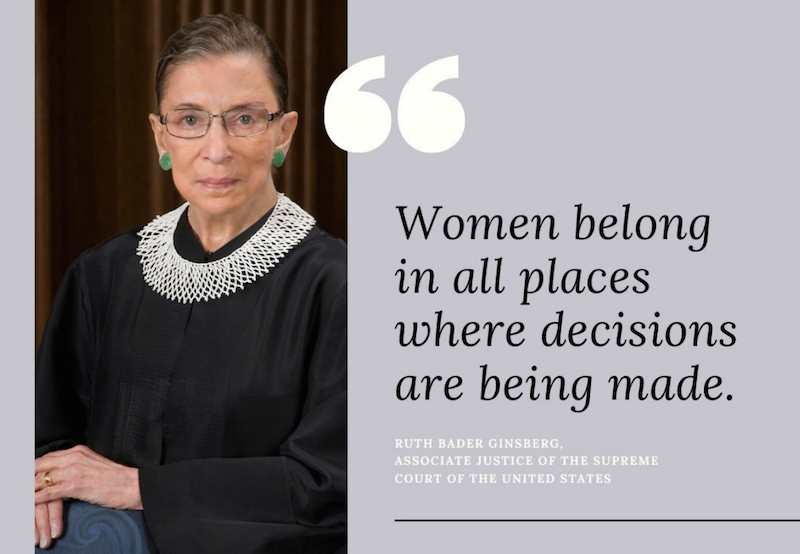 Her words ring crystal clear today: “Women belong in all places where decisions are being made.”

It’s just common sense. Women are more than 50% of the population. They deserve to have a seat at the table at every level of elected government where decisions are made about YOUR life. That’s the spirit of #5050x2028.

Read on to see what else caught our attention this month...

A 2015 survey by Ernst and Young and ESPNW found that 94 percent of female corporate executives had played sports. The same study found that wages of women who played sports were 7 percent higher than women who didn’t. When Fortune surveyed those on its list of most powerful women in 2017, 20 of the 31 who responded – 65 percent – had played sports in high school or college.

Read more about the role of sports in the fight for women’s equality here.

A record number of women are running for the House in the 2020 general election in both political parties, exceeding even the record highs of the 2018 election!

But Congress is only 1/10th of 1% of elected offices. Ready to make #5050x2028 a reality? It starts in your neighborhood, with women at the LOCAL level working toward common ground.

While there is still work to do, we are glad to see Democratic and Republican women stepping up to run – and win! This is how #5050x2028 becomes a reality NOW, not 50 years from now.

Check out the numbers here.

Research shows that using your personal networks to talk about civic engagement and politics can lead to an increase in voter turnout.

What does this mean exactly? The biggest factor between someone voting or not voting in an election could be YOU.

How can you begin conversations in your community about voting? How can you educate friends and neighbors about local races or issues that might not get the same attention as top-of-the-ticket candidates? Who can you ask to get involved ahead of November’s election – and stay involved once Election Day passes?

How can you make women and men working together in roughly equal numbers a normal expectation in your community?

Make a Plan to Vote

National Voter Registration Day has passed, but there is still some time to lock in your plan to vote!

Many states have deadlines to register or request a ballot coming in the next few days and weeks, so check in before it’s too late!

Once you set your plan, share this tool with EVERYONE you know! You have the power to engage your community and make a change.

Our September fundraising goal is in sight! Can you donate right now to help us hit it? We just need to raise another $1,100 by midnight!

We can’t sprint to the finish line of #5050x2028 without the fuel of your financial support. This movement is being built at kitchen tables, on Zoom happy hours, in community centers… and with your investment, we can make the leap and bring #5050x2028 to the halls of power in no time.

We have big things planned for October, and we can’t wait to share them with you! But first: Let’s crush this goal!

You can ACT on the words of Ruth Bader Ginsburg and demand women in all places where decisions are being made.