WCF was pleased to issue its 2018 Seal of Approval to the following outstanding candidates.

How We Selected 2018 Candidates 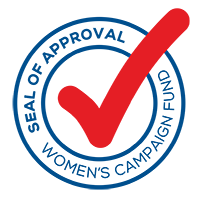 As a nonpartisan organization, WCF supports competent women candidates who demonstrate they have what it takes to win their races, find and build on common ground, and work effectively for the good of all at every level of elected office in the United States.

WCF criteria are not easy to vet.  With more than 200 women running in 2018, tough choices were made about several campaigns where a woman had a good record of reaching common ground overall, but a campaign strategy of divisive tactics.  People vote for what they want and expect to see the action and attitude they voted for in office.  So, we did not support those campaigns.

We provided a questionnaire to many campaigns so that each candidate had a chance to demonstrate how she met WCF’s criteria.  We thank those who responded and encourage those who did not to respond in future campaigns so that WCF can fully appreciate and acknowledge your alignment with our goals.

In 2018, WCF found at least one race, PA 5, where opposing candidates each met its criteria.  The main goal of the criteria is to identify women candidates who can build and maintain good government. WCF decided to acknowledge the tenor of the campaign overall, as well as the qualifications of the two women, by awarding WCF’s Seal of Approval to both.

Ultimately, WCF winnowed a long list of impressive women to a short list that served as bellwether races for our goals.  We applaud the more than 40,000 women who took steps toward candidacy since late 2016.  WCF’s message to them is simple: continue to claim your voice.

The Women’s Campaign Fund does not need to speak for all women, nor for all topics. WCF champions the ability of more women to speak for themselves, to reflect the reality of their right, working in equal numbers with men, to decide for themselves how their lives should be governed.

Thank you for supporting these outstanding candidates!